From the standpoint of a tourist, I found Syria rather a stark place, but infinitely rich in so many ways. This is the view from the hotel we stayed at in Damascus
As Stan Gorton captioned one of these photos in the Narooma News, “So beautiful and so troubled”. He got that right.
In one sense, Damascus is like any other european city - the streets are filled with bustling people, honking cars, and busy markets 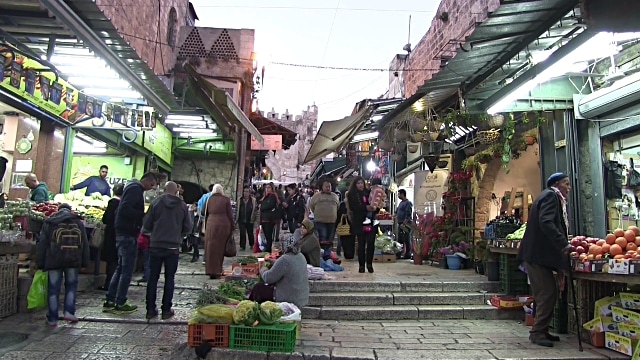 ​
However, the presence of soldiers in fatigues, shouldering semi-automatic weapons, is a hint that all is not as it should be! - There were military checkpoints every few blocks! ​
The Syrians are really doing it tough.  6 years of conflict has taken it’s toll.  Though the city is ancient and beautiful, it has become shabby.  There is the patina of war over everything. Plants are not healthy.  Windows are grimy and remain broken, and no-one is bothering to repair their cracked and crumbling homes until they’re sure it will be worth the effort.

So much of the country’s income has gone into the military, that there is not enough to provide a reliable power supply. They have power four hours on, and nine hours off during the day. Businesses, churches and the well-to-do rely on generators to supplement their power needs, and the poor of course, do without.

There is also a critical water shortage in Damascus. Just before we arrived, the terrorists cut off the water supply to Damascus and some other areas.  They poured diesel fuel into the storage facility, and destroyed the pumps. All water in Damascus now comes in tankers and bottles.  I actually felt somewhat guilty - the hotel we were staying had its own bore, and so we weren’t affected by the lack of water.  But oh how difficult it is for the rest of the city!

I found the visit both confronting and illuminating. On one level, it was very sad indeed. On another level, it was quite inspiring.

What was so sad was that we saw an amazingly rich culture, one that dates back to the second millenium before Christ, and which the Syrians proudly call ‘The Cradle of Civilisation’, once again under enormous threat.

The destruction is tragic and widespread. Ma'aloula is an ancient Christian village about an hour outside Damascus, where they still speak Aramaic - the language of Jesus. The three main churches there were destroyed.  Since the town was liberated in 2013, one church has been rebuilt, but the others remain in ruins, as the community has chosen to sow any resources they receive into rebuilding people’s homes.
Over the past 6 years of the conflict, ISIS and other extremist groups have systematically targeted ancient historic monuments, particularly churches, and their artworks, in an attempt to undermine the nation’s sense of identity.
We met an architect called Maria, who is now working on rebuilding projects in Syria. She maintained that much of the conflict in Syria has been imposed from outside the country, and is aimed at destroying its history and culture, in an effort to undermine and fragment the nation. She also said that the nation had been infiltrated by people with anti-Syrian agendas as much as 10 years prior to the conflict beginning.  She said that much money was plowed into particular private schools, and those young people were targeted and fed anti-government propaganda.  It was these young people who were harvested when the conflict began - all carefully planned.

The thing that I found most inspiring, however, was the amazing resilience of the people.  Despite the war, they carry on and take it all in their stride.  They make the most of what they have. Of course they are deeply saddened and angered by what is going on around them - for most of them it is not their fight - but still they carry on.  They continue to work and pray together that Syria will once again know peace.

One of the things that stood out in our meetings with all sorts of people while we were there, was that what is portrayed in international media does not give an accurate picture of what is happening in Syria.  Time and again, were were asked, “PLEASE - tell people what is REALLY happening in Syria.”

Just yesterday, I read an article in the UK Telegraph.  It was reporting on the so called ‘civil war’ in Syria. However, what we heard from the Syrians over and over again, was that there is no civil war.  In fact the opposite is true.  Christians and Muslims live peaceably, side by side, companionably sharing their lives - as they have done ever since Islam was first introduced into Syria. In most communities, the Church and the Mosque sit side by side. Christians and Muslims have always worked together to defend their country against threats from outside.

Many of the officials and church leaders we met maintained that what began as a peaceful protest back in 2011 has been 'hijacked' by the extremist groups and that the war is a war between the extremists and the Syrian Army.
I was surprised to discover that most of the Syrians we spoke to supported the regime.

We were privileged to be able to meet with some top dignitaries while we were there. We met with two government ministers: - the deputy foreign minster, and the minister for information and communication.  Both of them expressed great sorrow over seeing their country in the state that it is in.  Both of them told us that Syrians do not support the extremists, and pointed out that most of the extremists are not in fact native Syrians - most of them have joined the fight from other countries.

Father Dave Smith from Holy Trinity Anglican Church, Dulwich Hill, has visited Syria a number of times during the conflict. Through his youth centre initiative,  'Boxing for Peace', Father Dave has established valuable relationships with faith leaders and their communities in Syria. He has also promoted inter-faith conversations and together with his team,
has helped bring much encouragement, as well as medical supplies, to some of the devastated communities that have survived the conflict.
In 2016, Father Dave received an invitation to bring a delegation of clergy to Syria for a short term mission.
The delegation leaves on December 27th, returning January 7th.

The team is drawn mostly from the Anglican Church, with representatives from both the Diocese of Sydney and the Diocese of Canberra and Goulburn.  We are privileged to have an expert media team accompany us, and it is also great that Troy Hester, currently working with Anglicare to settle Syrian Refugees in Australia, is able to accompany us also.

The team includes: ​We count it a great privilege to come alongside our Syrian brothers and sisters at this critical time, praying with them as we move into 2017.
The readings set for Advent speak of a renewed hope for the people of God through the coming of the Messiah, and as we look beyond Christ's first coming to his return, we long for that time when he will make all things new.
As we await his return, it is our mandate as Christians to work together for peace in the name of Christ, and to bring his love to bear on a broken and hurting world.
It is our prayer that Syria will not only experience peace in 2017, but as a nation will be able to move forward into restoration & renewal as we await Christ's return.